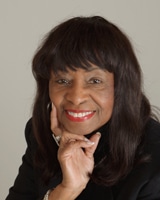 Rev. Joy Walker, minister at Unity of Southeast Texas, has been a Unity Truth Student for 31 years. She is a Licensed Unity Teacher and an ordained minister. She served as minister for Unity of Tulsa for 10 months, Unity of Shreveport for 10 years and Spiritual Leader for Unity of Longview, TX for five years.

Joy holds the title of Competent Toastmaster and has conducted numerous workshops and seminars, including one for the Association of Unity Churches People’s Convention. She was a New Thought delegate to the Parliament of World Regions in Melbourne, Australia in December 2009.

Joy has a Master’s of Science degree in Business and an MBA. She spent 26 years in higher education administration.  Joy has three adult children and six grandchildren.

Joy participated in the annual Interfaith Thanksgiving service again in 2017 by providing the opening prayer. The service was at St. Anthony Cathedral Basilica on Sunday, November 19. These are the participants in the 16th Annual Beaumont Interfaith Thanksgiving Service on Sunday, November 18 at The Church of Jesus Christ of Latter-day Saints. Rev. Joy, front and center, gave the opening prayer.

Minister On Television
Rev. Joy was on television three times in November 2018. She gave the prayer for the City Council for Beaumont on Tuesday, November 13. Those proceedings were televised. She participated in the 16th Annual Beaumont Interfaith Thanksgiving service on Sunday, November 18, in which she gave the opening prayer. This was shown on the 10 p.m. news that night. She was interviewed on FOX-TV during the noon news on Monday, November 26, 2018, where she shared about our TREATS WITH SANTA event. We are grateful to our minister for seeking to get coverage for our church.